Dry and calm weather in the first half of November gave way to wet and windier days as the month progressed, serving as a reminder that the meteorological winter season was not far off.

November’s air temperature peaked on the fourth day at 23.7°C as the islands experienced unseasonable autumn weather in the first half of the month, which is commonly referred to as is-Sajf ta’ San Martin or Indian summer.

The month’s mean cloud cover of 3.1 oktas was lighter than expected at this time of year. November’s 186.5 hours of sunshine were in line with the climate norm, with the sunniest day of the month clocking up 9.8 hours of sunshine.

In contrast, with a fleeting 0.5 hours of sunshine recorded, the 17th of November was last month’s bleakest day. With 27.7mm of rainfall collected in 24 hours, the day was also the wettest in an otherwise drier-than-average November. The 77.1mm of precipitation collected during the month failed to measure up to November’s rainfall quota of 101.7mm.

In November, the Met Office reported three thunderstorms in the second half of the month and shallow fog on six days.

The month was generally much calmer than the norm, maintaining a mean wind speed of 6.6 knots rather than the expected 8.3 knots. The windiest day was the 28th of November, producing the month’s maximum gust of 35 knots blowing from a south-east by south direction. 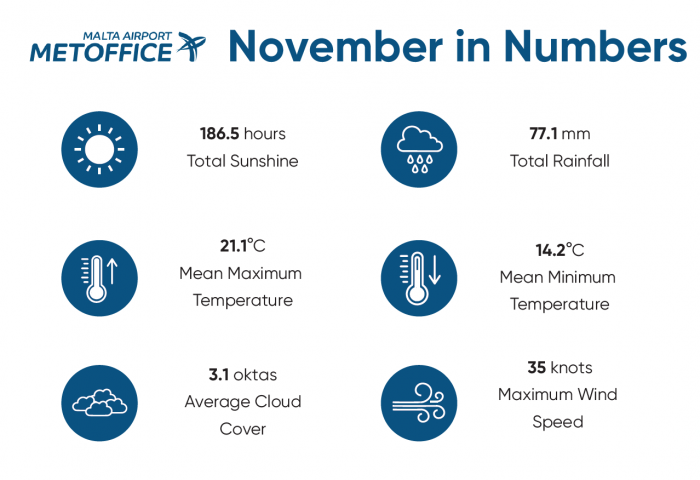