The last month of the year was also windier than expected, sustaining a mean wind speed of 10.4 knots compared to the climate norm of 9.1 knots. Blowing at 37 knots from a south-west direction, December’s maximum gust was recorded eight days into the month.

A look at meteorological data for 2020 shows that the maximum gust of the year was recorded in February, blowing from a north-west by west direction at a speed of 50 knots. Succeeding a drier-than-average January with 0.6mm of precipitation, the second month of the year became the driest February on record since 1923.

March provided a reprieve from this dry start to the year, showering the Maltese islands with 39.4mm of precipitation and kick-starting a wetter-than-average meteorological spring, during which 85.4mm of rainfall were collected.

Producing 121.2mm of rainfall – almost a third of all precipitation collected in 2020 – September claimed the title of wettest month of the year. However, standing at 386.9mm, total precipitation for the year under review did not measure up to the annual rainfall quota of 567.0mm.

September was not only the wettest month but also the stormiest, accounting for nine thunderstorms out of a total of 23 reported by the Meteorological Office last year.

Throughout the year, the air temperature ranged between a crisp low of 5.1°C, recorded in January, and a high of 38.7°C reached on the fifteenth day in August. While August was the hottest month, with 19 days exceeding the month’s climatic mean maximum temperature of 31.7°C, July was the sunniest with 365.6 hours of summer sunshine recorded. 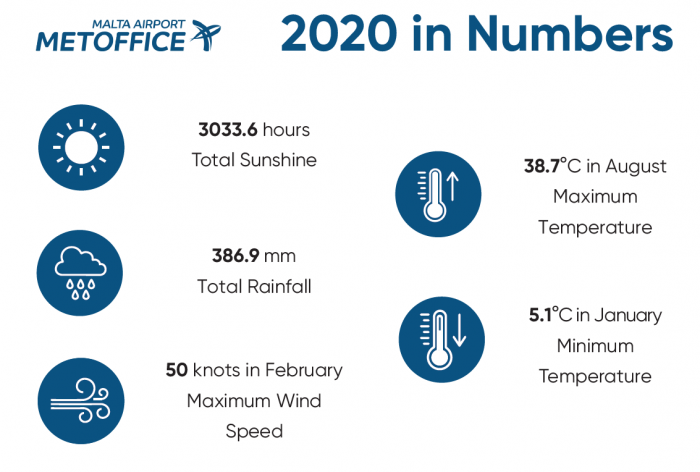