The meteorological summer brought air temperatures that ranged between a nighttime minimum of 17.2°C recorded in June and a daytime maximum of 39.2°C reached halfway through August. Having averaged at 27.9°C, the air temperature for summer was 1.7°C higher than the seasonal climate norm.

All three summer months recorded maximum air temperatures that were over 7.0°C higher than their respective mean maximum norms. At 38.0°C, last June’s maximum air temperature was 9.2°C higher than the mean maximum norm but did not topple the month’s record of 41.5°C reached in 2021. The month’s temperature peaked towards the beginning of last summer’s only heatwave, which stretched between June 23 and 28 as an area of high pressure persisted over the central Mediterranean. 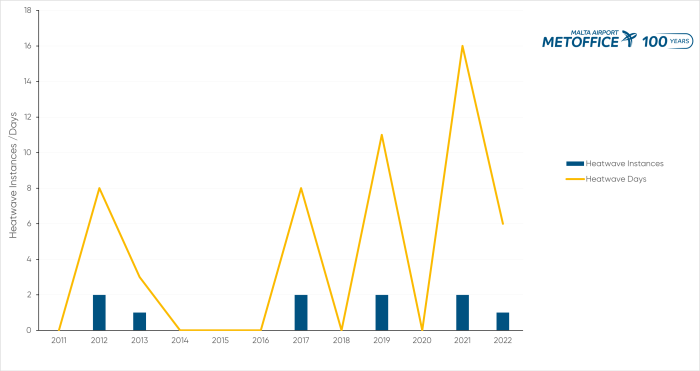 During the summer months a total of 1084.4 sunshine hours were recorded, surpassing the seasonal climate norm by 43.3 hours. Having clocked 378.5 hours of sunshine on the back of a lower-than-average mean cloud cover of 0.6 oktas, July was last summer’s sunniest month. While July delighted sunseekers with clear skies and sunshine, August treated keen cloud spotters to the frequent formation of imposing clouds which are associated with rainfall and thunderstorms.

Thunder was, in fact, reported on August 11 and 12, with the former day yielding 5.0 mm of precipitation in Ħal Luqa as some other localities in Malta were hit by more intense showers. A total of 7.0 mm of rainfall was measured by the Meteorological Office in August, making the month the wettest of the summer season. July and August – as June was completely dry – produced a total of 7.2 mm of precipitation, which did not measure up to the seasonal norm of 15.8 mm.

June accounted for summer’s strongest wind gust, which was measured on the tenth day of the month blowing at 40.7 knots from the West by Northwest. These winds brought temporary respite from the high temperatures that had been registered at the beginning of the month.