January traffic through Malta International Airport down 62% compared to 2020

January traffic through Malta International Airport increased fourfold over the same month in 2021. However, last month’s passenger numbers remained 62 per cent below pre-pandemic levels (2020), as the effect of restrictions introduced across Europe towards the end of last year rippled into 2022. 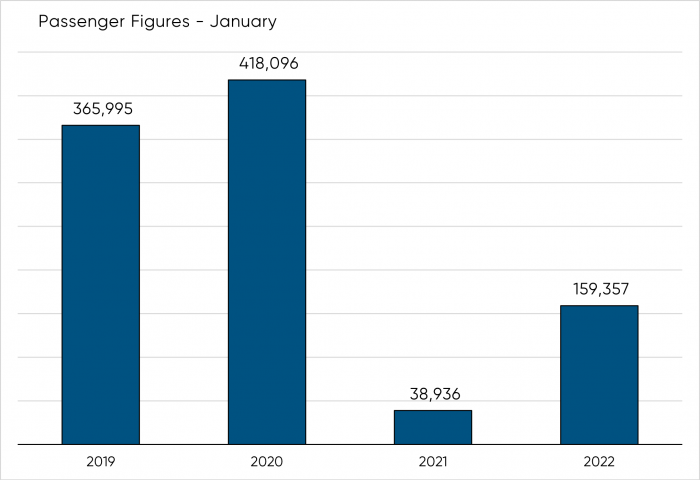 The seat load factor (SLF) for January stood at 55.7 per cent, indicating that just over half the seats available on flights operated to and from Malta International Airport were occupied throughout the month.

Flights operated from Malta carried a total of 159,357 passengers, with January’s top drivers of traffic being Italy, the United Kingdom, Poland, Germany and France. From among the top five markets, France showed the strongest recovery rate over 2020. Poland, on the other hand, was the only top market to register growth compared to 2020.

While Poland has featured regularly in Malta International Airport’s monthly market leaderboards since 2018, it is the first time that the market has outperformed both Germany and France to rank third. Poland’s excellent performance stemmed from the operation of the Warsaw-Modlin route in January and strong seat load factors registered across Malta International Airport’s seven Polish routes.

Prior to 2019 a lot of strategic effort by Malta International Airport and the local tourism authorities had been put into stimulating growth from the Polish market, as bigger legacy markets, including the United Kingdom and Italy, were reaching maturity.

The rest of the first quarter of 2022 is expected to be challenging. However, the recent easing of restrictions in important source markets for Malta International Airport and the coming into force of the new intra-EU/EEA regime are expected to gradually restore normality in relation to air travel over the coming months.

In a statement released jointly by Airports Council International (ACI) and the International Air Transport Association (IATA) on 1 February 2022, the two organisations urged the governments of five countries, including Malta, to “abandon unnecessary and damaging restrictions” and align their requirements with the common EU framework.

Malta International Airport would like to echo this appeal for requirements that facilitate travel and put Malta on an equal footing with similar Mediterranean destinations in time for the upcoming summer season.