May Traffic Through Malta International Airport Just 18% Below 2019 Levels 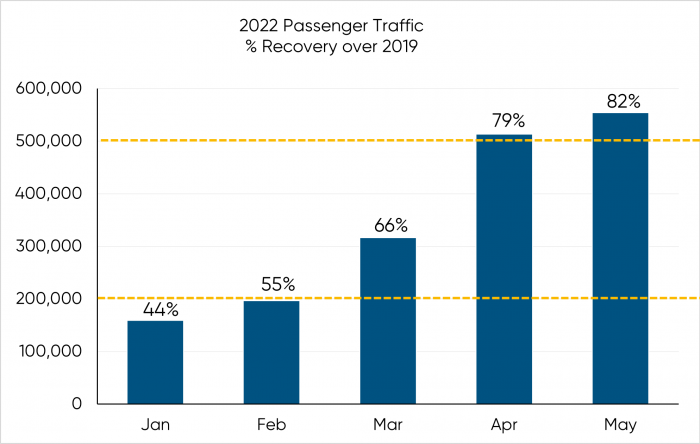 Passenger traffic recovered in line with the recovery of seat capacity, which was at 81.2 per cent of 2019 levels. 81.4 per cent of the seats available on flights operated to and from Malta International Airport were occupied during the month of May. Marking an increase of 1.1 per cent over 2019, last month’s seat occupancy was the highest Malta International Airport has registered in the past two years, indicating a further release of the pent-up demand for air travel.

Italy continued to lead the way in terms of market popularity, accounting for 121,120 passengers out of May’s total traffic. The United Kingdom, France, Germany and Poland too retained their rankings from the previous month. While Malta International Airport has recovered almost 80 per cent of its pre-pandemic connectivity, the recovery of routes connecting the airport to two of its core markets – the United Kingdom and Germany – is being achieved at a much slower pace. Prior to the pandemic, the United Kingdom and Germany had occupied the top and third spots of the airport’s market leaderboard respectively.

Looking at the wider picture shows that the most recent updated forecast for the industry was released by Eurocontrol last week. Eurocontrol’s forecast for flight movements in Europe provides three recovery scenarios, each of which takes into account the impact of the war in Ukraine. The baseline scenario, which falls in between a more pessimistic and a more optimistic scenario, shows that a recovery to pre-pandemic figures will be achieved in 2024, in a scenario where passenger confidence continues to increase, staff shortages are controlled, and the increase of energy prices and other costs have a limited impact on people’s purchasing power.