Malta International Airport this morning welcomed Finnair with a water salute and a cake-cutting ceremony. Finland’s largest airline will begin operating twice weekly flights to and from Helsinki from today.

On board the first flight was Malta’s Ambassador in Finland, Mr. Michael Zammit Tabona.

The airline has chosen Malta as part of its summer expansion across European destinations and will be flying directly to and from Malta International Airport with timetables designed for optimal connections with Finnair’s network of Asian destinations.

“We are delighted to be welcoming flag-carrier Finnair, with a fantastic new destination on our schedule: Helsinki. Our growing family of airlines enables us to further develop our route network and secure better connectivity for the Maltese islands,” said MIA CEO Alan Borg.

“We believe Malta is an attractive destination both for our Finnish and Baltic customers, as well as our Asian customers,” said Pekka Vauramo, Finnair’s CEO. “We are happy to connect the Maltese Islands to our extensive network of Asian and European destinations.”

Minister for Tourism, Dr. Edward Zammit Lewis welcomed Finnair on its inaugural flight to Malta stating this direct service from Helsinki fits exactly within Malta’s new tourism policy and strategy; and in particular with our objective to further develop the Scandinavian market. ‘I am also pleased to note that the timetables of these new flights were designed for optimal connections with FINNAIR’s network of Asian destinations, and in particular Japan. This augurs well for our destination, as these are markets which we are keen to develop as part of our long haul marketing strategy. These Finnair direct flights also have the potential of attracting business from the bordering Baltic region’.

Minister Zammit Lewis thanked the Malta Tourism Authority, Malta International Airport and other stakeholders for their continuous efforts for the country to continue reaping great results in the tourism industry.

Based in Helsinki Airport, Finnair will fly twice a week, on Mondays and Thursdays onboard the Airbus A321 Sharklet aircraft. 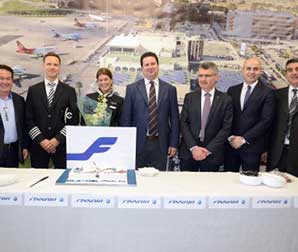