Just over 128,000 passengers through Malta Airport in September

Home » Corporate » News and Media » Just over 128,000 passengers through Malta Airport in September

September traffic through Malta International Airport registered a drop of 83.1 per cent when compared to the same month in 2019, with passenger movements totalling 128,664.

Aircraft movements and seat capacity for the month of September decreased by 57.9 per cent and 59.9 per cent respectively. Seat load factor (SLF) for the month registered a drop of 49.9 percentage points to stand at 36.3 per cent.

A look at Quarter Three

September brought quarter three to a close with a 77.6 per cent contraction in passenger traffic when compared to the same period in 2019.

Within this three-month period, peak recovery levels were observed in August – particularly in the first two weeks of the month – with passenger numbers increasing by 64.9 per cent over July 2020.

The introduction of Malta’s amber list together with other travel restrictions led to a downward trend in the second half of August, which persisted in September. September traffic, in fact, was approximately half of the traffic registered in August. 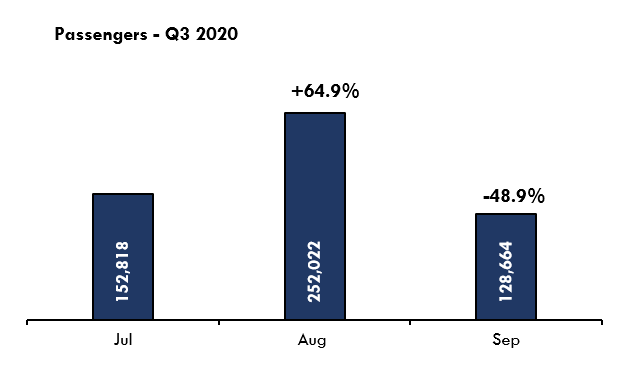 In the first week of October, Airports Council International published an updated passenger traffic forecast for European airports, which indicates that 2020 will end with a loss of 1.69 billion passengers translating into a drop of 69 per cent over 2019.